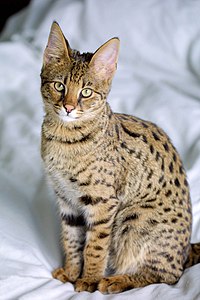 Savannahs are considered one of the larger breeds of domesticated cats. Their tall and slim build gives Savannahs the appearance of greater size than their actual weight. The coat of a Savannah depends a lot on the breed of cat used for the domestic cross. The overall look of an individual Savannah depends greatly on generation, with higher-percentage Savannah cats often having a more “wild” look. The domestic breed that is used will influence appearance as well. 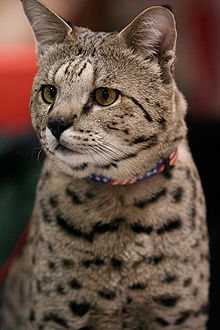 They are commonly compared to dogs in their loyalty, and they will follow their owners around the house like a canine.

Savannahs with all and slim build gives the appearance of greater size than their actual weight. F1 hybrid and F2 hybrids are usually the largest, due to the stronger genetic influence of the African Serval ancestor. Male Savannahs tend to be larger than females. Early generation Savannahs may weigh 20 to 35 lbs. Size is also very dependent on generation and sex, with F1 male cats usually being the largest.

Here is the list of Savannah Cat breeders.
F-1 Savannah vs. Bengal Cat

3 thoughts on “The Savannah Cats Online”